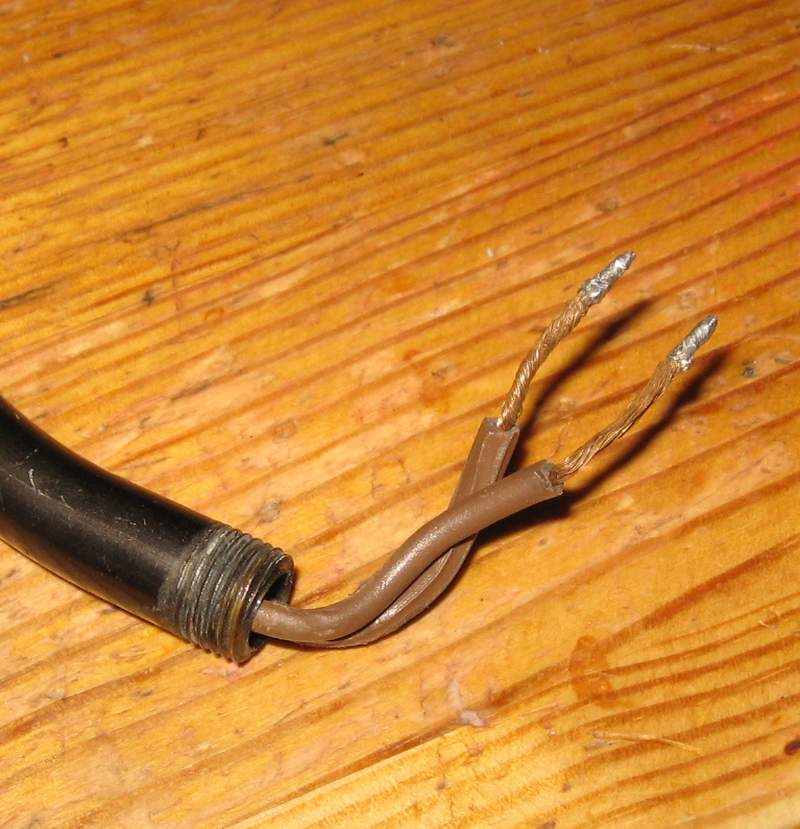 One question that is asked a lot when it comes to restoring old electric lamps and lighting, is the thorny issue of earthing and British legal requirements. The problem being is that 2 virtualy identical lamps can legally be both earthed and un-earthed (double insulated) depending on just what type of bulb or in the trade “Lamp” holder is fitted.

The IET regulate electrical standards and recommend safety requirements, they in essence say:-
1. Electrical equipment with exposed metal parts, by law must be earthed.
2. Electric light fittings constructed in a fashion and material as to be awarded a British standard double insulated notification ( square box emblem ) does not require an earth.

So with 2 seemingly contradicting legal requirements where do we, as lamp rebuilders stand? Well looking at the “Big Boy’s” the manufactures of current lamps you will find that most go down the double insulated all plastic lamp or bulb holder. This allows them to use twin cable/flex without an earth conductor. The benefits are in cheaper costs for wire and ease of threading thinner cables through the lights or lamps.

Now if your restoring a Herbert Terry 1227 you will be glad to hear that it’s fine to use nice thin 2 core flex, up and through those impossibly thin Anglepoise arms. However if your dream iconic lamp is all chrome and shinny including the bulb holder (which is now an exposed metal part) you now need an earth.

I have been looking for thin braided finish cable, that with 3 cores at 0.5 mill cross section that is able to fit into the arms of a 1227, sadly it appears to be a real unicorn of a item to find. It is possible to get a PVC / PVC ( plastic insulated, plastic out sheath) flex that will just about fit, but its only available in black or white. Personally I feel that vintage pieces need to have authentic looking silk braded flex. If it’s a modern example then fine but as the flex is an ideal place to add a splash of signature colour the PVC palette seems awfully bland.

So to the conclusion and time to make a stand. If your restoration project has:-

However some would argue and with what I consider is a valid point. That the flex that runs up the arms and is constantly moving and bending as the lamp is “poised” in different position has the risk of failing, touching the metal parts and turning the lamp into a electrified trap. If the lamp had an earth with it would be more likely blow the plug fuse than blow you across the room when touched.

Scenario 2, a lamp with a metal bulb holder, quite simply needs an earth wire full stop. As you well know it’s not that simple when cable runs are so tight that fitting a cable size not originally designed to accommodate is very difficult. This problem is compounded when the manufacture of the light fitting puts the earth connection on the outside of the fitting. This causes you to improvise a way of routing the earth flex out of the arms and separate a single strand of flex to the earth point.

In an ideal world you would buy a chrome / metal lamp (bulb) holder with an internal earth connection, cable grip and a silk braided flex thin enough to carry the current load safely and yet be thin enough to traverse the thin arms of an Herbert Terry 1227. This arrangement would give you the most aesthetically pleasing, electrically legal and safest re-wire.

In the real world this would be virtually impossible unless the physical laws of electrical cable capacity change overnight somehow. The early anglepoise lamps had the same earthing issues, which was solved by the addition of a earthing bolt fitted to the centre yoke.

Personally I feel the addition of an earthing bolt is the best solution, although the high resistance across the arm pivots and rubber washers may cause earth continuity problems (the imaginary route the earth wire takes from earth bolt to faulty live wire touch point on lamp). It also requires the separation of 1 core to run to the earth point in an awkward solo effort loop. Yes that does look a little out of place against the sleek lined design, but what price is safety?

Now if you don’t have an early 1227 and the thought of drilling a hole into your prized possession is abhorrent, yet understand the sensible need for safety earthing than what? A common solution is to fit the earth cable with an eyelet end and pass one of the pivot pins in the arm assembly through it giving a less destructive earth point.

At the end of the day what do I do? Well for me as an electrician, restoration professional and great respecter of vintage lamps, I always earth, safety first. Besides when I PAT. (portable appliance test) a lamp, it’s always a nice warm feeling that I’m adding an extra layer of safety that come a freak accident or excessive use, my work is up to the task and safe as can be